The Gruyère AOP of the Grandcour cheese dairy has been designated as the Cheese of Excellence by the canton of Vaud government for the year 2021. Produced under the direction of cheesemaker Jean-Daniel Jäggi, this Gruyère AOP will be served at the official receptions this year, along with the new wine of honour voted by the State Council. The wine is the 2019 vintage of Domaine de Autecour, AOC la Côte, property of the Schenk family.

“It’s a profession of passion. When one has quality milk, it’s necessary to be meticulous. But as it is a living product, one is never free of the risk of a blunder.”

“For the moment, due to the pandemic, orders for the official receptions aren’t very numerous”, chuckles Mr. Jäggi. “But all the same it is a wonderful recognition of accomplishment for the work done by our milk producers and our cheese dairy. Additionally, last December, the media showcased this award and as a result we gained new clients.”

Like all the competitors for the canton of Vaud distinction, the Grandcour Gruyère AOP obtained an average result of more than 19 points during the evaluation process between May 2019 and April 2020. The reasons for its success? There are a number of factors that need to be taken into account. However, Jean-Daniel Jäggi is convinced of the importance in having good communication with his eight milk producers: “I have worked here for more than twenty years. We have been able to create a relationship based on trust between us. I am lucky that they deliver their milk twice daily. We have a personal contact. If there’s a problem, we work it out straight away.”

It was in 1997 that Mr. Jäggi started working in the former Grandcour cheese dairy. In 2002, he welcomed the milk producers from Delley and Chevroux. That was an opportunity for the dairy company to envisage a new building. Three years later, a brand new cheese dairy was inaugurated. Mr. Jäggi is very happy with his equipment. “The only thing we didn’t plan for,” he observes, “is the ever-growing success in our adjoining shop. The local sales have become consequential, especially in summer when we deliver to the campgrounds along the lake. We could have therefore had a larger preparation area, in particular for the yogurts and butter.”

The Grandcour cheese dairy produces 304 tons of Gruyère AOP annually. “It’s a profession of passion,” Mr. Jäggi is delighted to say. “When one has quality milk, it’s necessary to be meticulous. But as it is a living product, one is never free of the risk of a blunder.” Luckily, his four production employees make a good team in which he has confidence.

Twelve years ago, not finding qualified workers, he went to the ORP, which proposed Benjamin Ozoekwe Chijioke, who knew nothing of cheese. All the same, this young Nigerian adapted very quickly and completed his CFC as a cheesemaker. Today, he is Mr. Jäggi’s right hand man. “It’s a beautiful path we’ve travelled together and he gets on well with the milk producers. Later, I also hired Mr. Aubert Atiogbe, a native of Togo, once again through the ORP, because I believe we all deserve a chance. And that is also going very well.”

The cheesemaker envisages the future with serenity. “We have had an excellent growth period these past ten years. We are going to do all we can to maintain it.” Jean-Daniel Jäggi is also a committed member within the group of cheesemakers in the French speaking part of Switzerland. He enjoys the exchanges with his colleagues. Together they fight for love of their profession and for its values to endure. 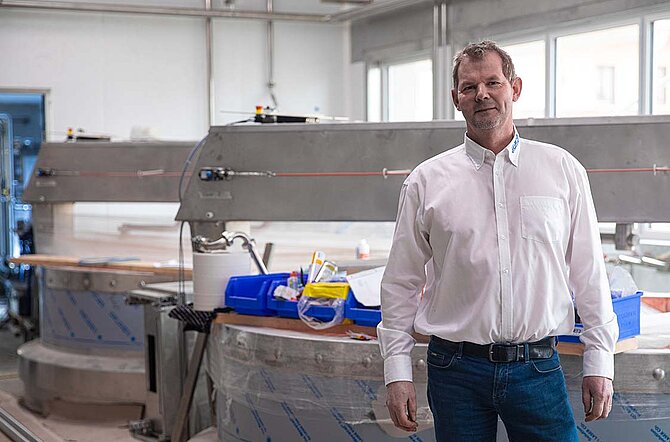