Authenticity and proximity at the heart of Le Gruyère AOP identity

Le Gruyère AOP cheeses from the Semsales cheese dairy will delight guests at government receptions of the canton of Fribourg throughout 2021. Indeed, the State Council awarded the distinction of the best Gruyère AOP to the cheesemaker Manu Piller, who works closely with his son Loïc as well as two workers and an apprentice. They produce 220 tonnes of Le Gruyère AOP per year.

"Today, we always want to bring something new. Above all, I think that we should consolidate what we have put in place, because we have a structure that holds up well."

Manu Piller is full of ideas and energy and is not afraid to roll up his sleeves to defend the cheese he loves so much! In 1997, he participated in the creation of the Interprofession du Gruyère. Today, as a delegate, he is still involved in the decisions. When asked what he wants to contribute, his answer is immediate: "Today, we always want to bring something new. Above all, I think that we should consolidate what we have put in place, because we have a structure that holds up well. When you go too fast, it's difficult to manage. We have to listen, live in the modern world, but not chase it, especially since the identity of our Gruyère AOP is based on its authenticity, its proximity and not on globalisation."

Since Manu Piller took over the cheese dairy in Semsales in 1994, the premises have changed considerably. In 2000, the cellars were refurbished; in 2015, the dairy was emptied to be completely redone. It ceased operations during the six months of work. That's when his son Loïc joined him: "He arrived at the right time. He was able to participate in the transformations and the choice of installations. I took this opportunity to pass on the torch to him. When we reopened the cheese dairy, he was comfortable with the new infrastructure. He was able to easily find his place and take over the lead."

Obviously, starting to work with his son has been a big change, even though it has been a great joy. Everyone has to find their bearings and their place. Everyone has to adapt: "I was fully prepared for it. But it didn't happen as I had imagined. Not necessarily in a worse way, but in a different way. He is lucky enough to have the enthusiasm of youth and I have many years of experience behind me. We learned a lot by comparing our points of view and each of us making compromises. Today everything is going well and I am proud to share this passion with my son."

To ensure the quality of his Gruyère AOP, Manu Piller is keen to maintain a strong link with his partners, the milk producers. If I have a problem in the morning with milk that has been delivered, I go to the producer concerned at the end of the day before the milking. I do some analysis and we try to solve the problem together, without mentioning penalties, which wouldn’t solve anything. I'm lucky to be good at repartee and they appreciate the way I do things."

Manu Piller frequently welcomes groups of visitors to show them the cellar, the work in the cheese dairy and of course for a tasting. “Opening our doors is the best way to advertise. After a visit to a cheese dairy, if a consumer finds himself in front of a stand with about fifty cheeses, he will be attracted to Le Gruyère AOP, because he has kept in mind the values of our hard cheese.”

In a few months' time, Manu Piller will be able to receive his visitors even better because he recently acquired a building opposite his tea-room shop. He found it a bit cramped, so he is currently renovating it to turn it into a shop to sell local products, a restaurant and a cellar for visitors. A new challenge for the next few years! 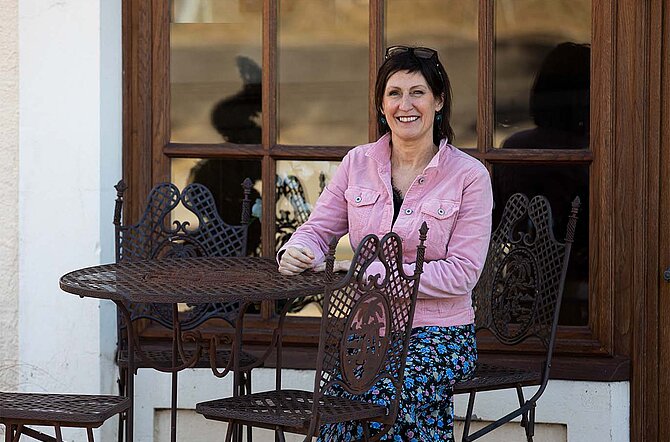